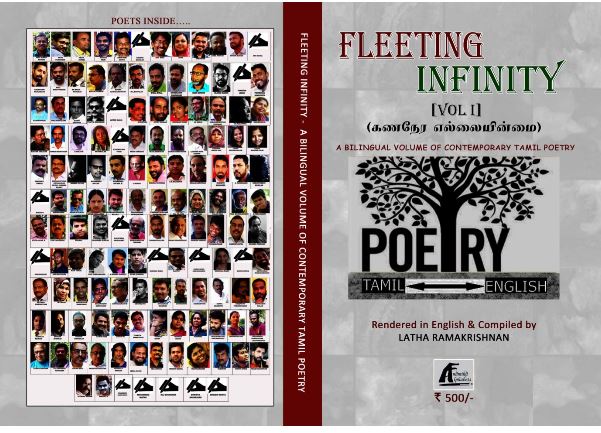 This is a 330-page volume of contemporary Tamil Poetry rendered in English and compiled by Latha Ramakrishnan, a prominent translator of literary works from Tamil to English and vice versa. She lives in Chennai. Published by Annamikaa Alphabets (her own publication) in January this year, it is priced at Rs. 500/= Indian currency. The writer's e-mail is: lathaa.r20102gmail.com

Latha Ramakrishnan (62) is not only a translator (more than 30 books) but also writes poetry (11 volumes), short stories (2 collections) literary criticism and essays (3 books). She is in Thamilaham literary world for the last 35 years. She also writes under various pseudonyms (Rishi, Anamika and her own name). She is on Facebook for the last three years. Most of the poems translated are poems by fellow poets that appeared on Facebook. They were in Tamil. Only a few are from Lankan Tamil poets. Among the latter, I happen to know only well-known people.

One thing good in this collection is that she has published the original Tamil version and her English translation side by side. Although she has translated about 600 such poems, she has included only 139 poets for volume one.
One should congratulate Latha Ramakrishnan for her genuine interest in translating these Tamil poems into English although in her Foreword she modestly says. “Of course, they may be imperfect and my translation may not be doing full justice to the original poem. Yet, I dared (and dare) to go on for the sheer joy it gives me and to my Facebook friends”. The translator also says that she “found solace in, admiring their (the poets selected for this volume) style and content.”

She is a Post-Graduate in English from Presidency College, Chennai. What I wanted to do here her version in English of some of the Lankan Tamil poems for the benefit of non-Tamil knowing readers. She has arranged the names of the poets according to the English alphabets and yet I wouldn't know who among them Lankans are. Therefore, I am selecting only those whom I know well.

Her original poem is titled “Alaiapukal Varatha Cellphone” Here is the English translation:

Cell Phones with no Incoming Calls-
There might have been an earthquake
In the underground hideouts of Earth:
The signs of landslide are there to see.
Deep down the Volcano fire
Begins to emit cinders.
Upon the Wal of house
Cracks breaking it into two
Appearing
The porcelain vessel
Which I had dusted and cleaned
With great care yesterday
Slipped from my had so unexpectedly
And smashed into splinters;
In the new dress of the child
The stitching has loosened
From the number saved
No call comes to
My mobile at all.
Dense Fog
Stands to block the way
At a distance is seen that human form;
Whether coming or going
Remains blurred.

(Anar comes from Kalmunai and I too has translated one of her poems into English.)

I felt it was searching for a blossom
the flower born in clusters
swayed in the wind as orphans.

The dragonfly intent on chasing away loneliness
kissed my window-glass
and returned
I search for the dragonfly that drives of my loneliness
in a solitary hour
nowhere to be seen as yet.

Must-have acquired it ate. Or else,
it must have destroyed itself
in the figment of the imagination.
Confused to the core
I search for the dragon-fly
that dives off loneliness
nowhere to be seen as yet.

Going out I search for the dragon-fly
that remains all in all in my memories,
in front of the window also.
The dragon-fly is nowhere;
I see myself.

Lankan Sinhala readers might be able to read and understand the contemporary Lankan and Indian Tamil poetry by reading this through English.