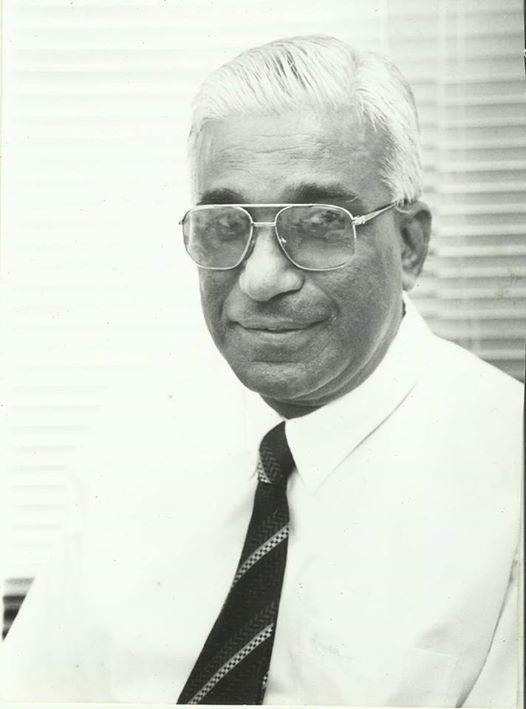 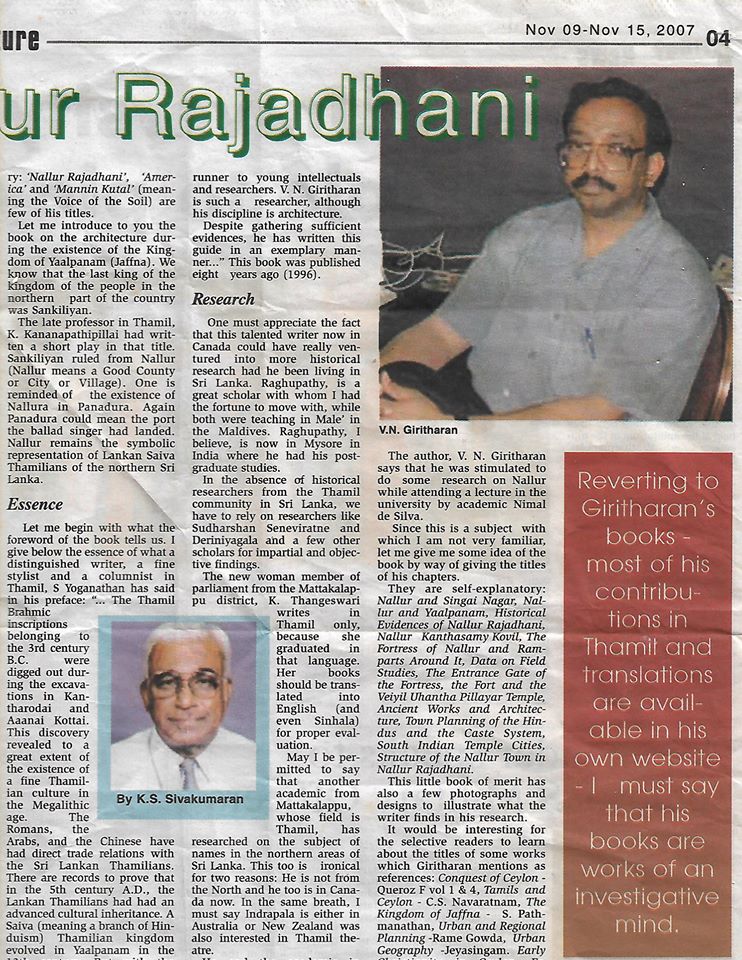 K.S.SivakumaranLanka born Canadian Thamilian V.N. Giritharan writes fiction, poetry and prose writing in Thamil. Some of his creations are  truly remarkable. His books are of interest and in fact exposes of the pattern of living in foreign claims by former Lankans. An architect (from the Moratuwa University) he is also a qualified. electrical and electronic engineering Technologist. He has wide  interests in the sciences, history and children's literature. On top of it, he is serving a useful purpose in the Cyberspace.

While there are more than a dozen websites in Thamil promoting literary and cultural events of the Thamilians in Thamilnadu in India, it is Giritharan's 'Pathivukal' e-zine that gives almost exclusively a comprehensive coverage of the Lankan Thamil literary scene, apart from other subjects like politics.

One other Thamil website, also from Canada - the e-zine Kuviyam - also covers a larger area of Thamil studies and  related matters in a broader scope.

Thamil literature
But the accent in 'Pathivukal' is on contemporary Thamil literature including what is produced in India. Both Giritharan and Pon Kulendiren accommodate me with my contributions in  English in their e-zines. It must be also said that Giritharan's daughter has her own website,booktrain.ca, for the kids, in English. She, herself a 12 years old, writes to the Toronto newspapers.
My difficulty in writing in Thamil via the Internet is that I cannot  typein Thamil and also I don't know how to use any of the  fonts available. That is why I was unable to send any material in Thamil to Lankan newspapers and magazines via the Internet.  Thus my computer literacy is incomplete. But I am trying to master the technique.

Here in the West, they never say die. That positive attitude drives them to reach greater heights. May I say that most  Lankans have negative attitudes and rely solely on the Karmic  theory. This is why some of us are sluggish and not  hardworking as others.

Reverting to Giritharan's books - most of his contributions in   Thamil and translations are available in his own website - I   must say that his books are works of an investigative mind. The  titles of such books are self-explanatory: 'Nallur Rajadhani ',   'America' and 'Mannin Kutal' (meaning the Voice of the Soil) are few of his titles.

Let me introduce to you the book on the architecture during the existence of the Kingdom of Yaalpanam (Jaffna). We know  that the last king of the kingdom of the people in the northern   part of the country was Sankiliyan.

The late professor in Thamil, K. Kananapathipillai had written a  short play in that title. Sankiliyan ruled from Nallur (Nallur  means a Good County or City or Village). One is reminded of    the existence of Nallura in Panadura. Again Panadura could  mean the port the ballad singer had landed. Nallur remains thesymbolic representation of Lankan Saiva Thamilians of the northern Sri Lanka.

Essence
Nallur RajadhaniLet me begin with what the foreword of the book tells us. I  give below the essence of what a distinguished writer, a fine  stylist and a columnist in Thamil, S Yoganathan has said in his  preface: "... The Thamil Brahmic inscriptions belonging to the  3rd century B.C. were dogged out during the excavations in  Kantharodai and Aaanai Kottai. This discovery revealed to a great extent of the existence of a fine Thamilian culture in the Megalithic age. The Romans, the Arabs, and the Chinese have had direct trade  relations with the Sri Lankan Thamilians. There are records to  prove that in the 5th century A.D., the Lankan Thamilians had had an advanced cultural inheritance. A Saiva (meaning a branch of Hinduism) Thamilian kingdom  evolved in Yaalpanam in the 13th century. But with the advent  of the Portuguese rule in Sri Lanka the fall of the kingdom was  inevitable.

Historians belonging to the Thamil community have not  sufficientlyunearthed historical facts relating to the history of  Thamilians in Sri
Lanka, although academics in the calibre of  Indrapala, Pathmanathan, Sittampalam and Raghupathy have  endeavoured to do so spasmodically. Raghupathy's book  'Early Settlements' in English is a forerunner to young intellectuals and researchers. V. N. Giritharan is such a   researcher, although his discipline is architecture.

Despite gathering sufficient evidences, he has written this guide  in anexemplary manner..." This book was published eight   years ago (1996).

Research
One must appreciate the fact that this talented writer now in Canada could have really ventured into more historical  research had he been living in Sri Lanka. Raghupathy, a great  scholar with whom I had the fortune to move with, while both were teaching in Male' in the Maldives. Raghupathy, I believe,  is now in Mysore in India where he had his postgraduate studies.

In the absence of historical researchers from the Thamil community in SriLanka, we have to rely on researchers like  Sudharshan Seneviratne and Deriniyagala and a few other   scholars for impartial and objective
findings.

The new woman member of parliament from the Mattakalappu district, K.Thangeswari writes in Thamil only, because she  graduated in that language. Her books should be translated into English (and even Sinhala) for proper evaluation.

May I be permitted to say that another academic from Mattakalappu, whose field is Thamil, has researched on the subject of names in the northern areas of Sri Lanka. This too is   ironical for two reasons: He is not from the North and he too is in Canada now. In the same breath, I must say Indrapala is either in Australia or New Zealand was also interested in Thamil theatre.

He and the academic in English Tiru Kandiah adapted Irish  playwright Synge's play 'Riders to the Sea' and staged in  Peradeniya and Colombo in the 1970s.

So, If we were to call our history, a Sri Lankan history, we  must objectively and in an unbiased manner do research on the  past history of the people, places and events of the Thamil speaking. The truth is not totally white or black, it is also grey.

The author, V. N. Giritharan says that he was stimulated to do  some research on Nallur while attending a lecture in the  university by academic Nimal de Silva. Since this is a subject  which I am not very familiar, let me give me some idea of the   book by way of giving the titles of his chapters.

They are self-explanatory: Nallur and Singai Nagar, Nallur and Yaalpanam, Historical Evidences of Nallur Rajadhani, Nallur   Kanthasamy Kovil, The Fortress of Nallur and Ramparts Around It, Data on Field Studies, The Entrance Gate of the  Fortress, the Fort and the Veiyil Uhantha Pillayar Temple,  Ancient Works and Architecture, Town Planning of the Hindus and the Caste System, South Indian Temple Cities, Structure of the Nallur Town in
Nallur Rajadhani.

This little book of merit has also a few photographs and designs to illustrate what the writer finds in his research.

It would be interesting for the selective readers to learn about the titles of some works which Giritharan mentions as  references: Conquest of Ceylon - Queroz F vol 1 & 4, Tamils  and Ceylon - C.S.Navaratnam, The Kingdom of Jaffna -  S.Pathmanathan, Urban and Regional Planning -Rame Gowda,  Urban Geography -Jeyasingam. Early Christianity in Ceylon   -Fr. Peiris, Fr.Meersman, Living Architecture: Indian -Andreas Volwahsen, Monumental Art and Architecture of   India - K, Sundaram, The Arts and Crafts of India, and Ceylon  - Ananda Coomarasamy,'The Ancient Town Planning of Anuradhapura' Rowland De Sylva  The Kings of Jaffna during the Portuguese Period - Fr. Gnanapargasar. Articles in Thamil  relating to the subject are also mentioned by the author.

These articles include those by Kula Sababathan, S. Rasanayagam, A. Muttuthambipillai, K.S. Nadarajah, B.S. Acharya, R.P. Sethupillai,
C.K.Sittampalam, K.Gunarasa, M.K. Anthony Sil. The writer has also referred to the maps of   the Survey Department, and Jaffna Town Planning Assessment Surveys.

The book is published by Mangai Pathipagam, Toronto, Canada.